A Salute to a Brave Founder and her Baby 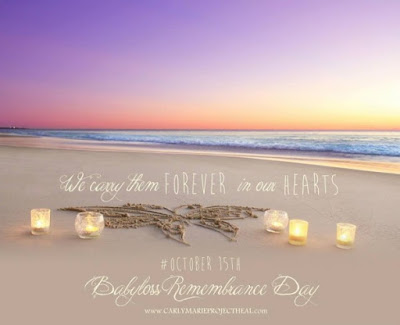 October 15 was Pregnancy and Infant Loss Remembrance Day, which was recognized and supported by the JLB Project, an organization in Flagstaff, Arizona that offers support for those who have lost a baby.

I spoke about the JLB Project and its founders, Anna and Mike LaBenz, at the AFP Arizona Statewide Conference in July 2015, hosted by the AFP Northern Arizona Chapter, and shared the following remarks. This seems like a good time to share them again.

Today, I'd like to tell you a story about a courageous and big hearted woman named Anna.

I first met Anna LaBenz nine years ago. She and her husband, Mike, had approached the Flagstaff Medical Center Foundation wanting to make a substantial gift to the hospital. As the former Foundation Director, I was brought in to help advise on the gift.

And I turned the gift down. Sort of. Let me tell you why.

You see, I met Anna at a very difficult time in her life. She and Mike had been expecting their second child and tragically lost their son at full term due to an umbilical cord accident. As you can imagine, they were devastated. But they also felt lonely...almost ostracized...by their loss. What do you say to someone who loses a child this way?

Anna wanted to do something to channel her grief. So we talked about what she and Mike wanted to do with their gift.

“We want to help other parents who are dealing with this. No one should have to go through this alone.”

What Anna and Mike identified, was that there were plenty of grief counseling programs for people who have lost loved ones, or even lost a child. But a program that could talk with parents who lost a child from conception through the first year? Those programs were very rare, and very erratic in their implementation.

I told Anna and Mike, very honestly, that the hospital was not the place for their gift. The hospital was a great place for acute care, but not for dealing with the impact afterward. I ended up connecting them with Northland Hospice, and Anna began the program there. After a short while, it became clear that there was a much greater need for their program than either Anna or Mike anticipated, so Anna bravely launched her own nonprofit, the JLB Project, standing for “Jack's Little Brother.”

The story could have stopped there. Another nonprofit launched, another gift directed to what the donor felt passionately about.

But there's more to the story.

The JLB Project has now been a pretty stable nonprofit for about 8 years. Anna has served as the Board President for the entire time, taking the lead on most things. I helped with board training early on, and I kept in touch with Anna, so I wasn't surprised to hear from her recently. She asked for a short advising session to talk about JLB.

That...is one of the most brave things I have ever heard come out of a founder's mouth.

Anna could have easily blamed burnout. It's so common in the nonprofit sector—we give and give, for little return, and we just exhaust ourselves.

Anna could have blamed other people involved. We often blame our board, our staff, our donors, our clients, for our challenges, even when it's not necessarily fair to do so.

But instead, she looked to herself. And realized it was time to let the organization grow.

When she started JLB Project, it was just like JLB would have been. It was an infant, needing constant attention and lots of personal investment.

As the organization became established, it was like a toddler. More people could be involved in the care and feeding of the JLB Project, but Anna, MOM, was still the primary caregiver.

When it became a “preschooler,” the JLB Project went through some growing pains, and a few things got parceled out to other team members, but the main weight of the responsibility still lay on the mom, on Anna.

It's not ready to fly on its own. I think Anna understands that she still needs to be involved. To be the moral compass. But it's ready to not have “mom” involved all the time.

And it's hard as a parent, some times, to let go.

I infinitely respect Anna for understanding that the future success of the JLB Project requires that she, as the founder, give it a little space. It's so easy for founders of organizations to make it about them, or about their personal needs, thinking no one can do this as well as they can. Instead, Anna is about helping the organization grow.

So now, what Anna is looking for, are people that she can trust to help take care of her maturing “child.” And she has to believe in her heart, that as a parent, she has imbued this child, this organization, with enough of her values that it will continue on the right path. 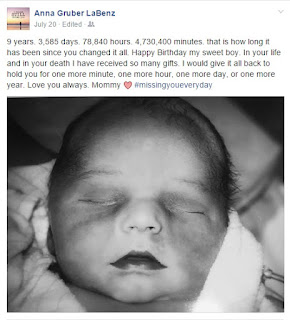 In July 2015, Anna posted a beautiful photo of JLB on Facebook. Her caption read:

JLB will always live for Anna and Mike LaBenz. And thanks to Anna's visionary leadership, I'm confident the JLB Project will live on as a critical community service, and a fitting tribute to JLB, and to his loving parents.

***
Afterword: Several months after these remarks, I was honored to facilitate the JLB Project's reflective, cathartic, and often emotional strategic planning process. They are now moving forward with a plan to help the organization grow in a way that supports self-care for the participants, and personal and organizational resilience. Several people have stepped up for increased responsibility in "parenting" JLB. I'm extremely proud of their efforts, and encourage people to support them. If you'd like to give or volunteer, visit their website or Facebook page.
Posted by Alice Ferris at 8:56 AM No comments: